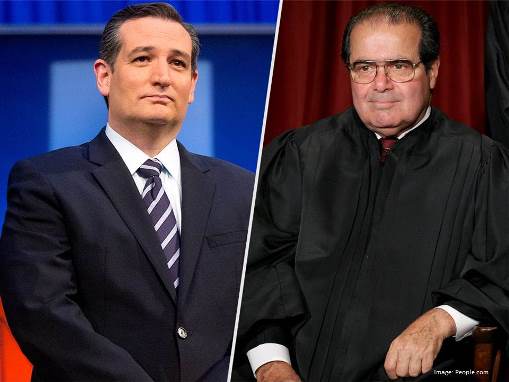 Internet trolls and the perpetually outraged will be predictably stirred-up by our headline, but in the race to memorialize the late Supreme Court Justice Antonin Scalia during the South Carolina Republican debate the only candidate who actually got Scalia right was Senator Ted Cruz of Texas.

What made Justice Scalia such a giant of modern American jurisprudence was not only his eloquent opinions – and dissents – based on an originalist understanding of the Constitution; it was his application of that understanding to the many encroachments on individual liberty imposed through the federal government’s now-vast reach.

More than any other candidate Ted Cruz has made forcing the federal Leviathan back inside its original constitutional boundaries a central element of his campaign and this has come through loud and clear in his record in the Senate and in his comments during last night’s debate.

Then again, Senator Cruz had a somewhat unfair advantage; he was around Justice Scalia when serving as a law clerk of Chief Justice William Rehnquist and is the only candidate in the race to have argued not just one, but nine case before the Supreme Court, more than any practicing lawyer in Texas or any other current member of Congress.

As The New York Times once observed, “In nearly every speech Ted Cruz delivers in his United States Senate campaign, he repeatedly mentions the United States Supreme Court,” because Cruz understands better than any other candidate that is where the great matters of individual liberty and the federal government’s extra-constitutional remaking of our culture will ultimately be decided.

So it was quite telling that Senator Cruz in his first comments about Justice Scalia mentioned his landmark Second Amendment opinion in Heller v.  DC.

Commentators with a greater claim to constitutional scholarship than we have may dispute this view, but we think Heller and its confirmation of the individual right to keep and bear arms is Justice Scalia’s greatest contribution to individual liberty.

Justice Scalia’s methodically argued and logically written opinion saying, “Putting all of these textual elements together, we find that they guarantee the individual right to possess and carry weapons in case of confrontation. This meaning is strongly confirmed by the historical background of the Second Amendment . We look to this because it has always been widely understood that the Second Amendment , like the First and Fourth Amendment s, codified a pre-existing right. The very text of the Second Amendment implicitly recognizes the pre-existence of the right and declares only that it “shall not be infringed.” As we said in United States v. Cruikshank, 92 U. S. 542, 553 (1876) , “[t]his is not a right granted by the Constitution. Neither is it in any manner dependent upon that instrument for its existence. The Second amendment declares that it shall not be infringed … .”

Fidelity to the principle that human beings have rights that government may not infringe is an attribute that sets Ted Cruz apart from all the other 2016 candidates for President – particularly Donald Trump.

While Trump said some nice things about Justice Scalia and got it right in arguing that responsibility for making sure Obama did not appoint a far-Left successor in the mold of Justice Ginsburg, Breyer, Sotomayor or Kagin many of his best applause lines during the campaign are anathema to the principles of individual liberty espoused by Justice Scalia.

Trump’s embrace of abortion as a “choice” and his favorable comments about appointing his sister who is a federal judge to the Supreme Court — and wrote a much-criticized opinion in support of partial-birth abortion — are the most obvious deviations from Justice Scalia’s views, but Trump is often far out-of-sync with constititonal originialism.

Contrary to Justice Scalia’s focus on individual liberty, many of Trump’s big applause lines such as, “We’re going to get Apple to build their damn computers and things in this country instead of in other countries,” could only be accomplished by extra-constitutional means, such as coercive taxes and regulations that no president could properly accomplish on his own authority.

Likewise Trump’s embrace of the Kelo v City of New London decision allowing government to use eminent domain to take private property for private “economic development” projects is in stark contrast to Justice Scalia’s views – and the views of Ted Cruz.

Justice Scalia ranked Kelo with the odious Dred Scott decision and Roe v Wade as a case the Supreme Court got disastrously wrong. “My court has, by my lights, made many mistakes of law during its distinguished two centuries of existence,” Scalia said in a speech at the Chicago-Kent School of Law. “But it has made very few mistakes of political judgment, of estimating how far … it could stretch beyond the text of the Constitution without provoking overwhelming public criticism and resistance. Dred Scott was one mistake of that sort. Roe v. Wade was another. … And Kelo, I think, was a third.”

In our view there’s only one candidate for President who is committed to putting a stop to the decades-long push of liberal Democratic and establishment Republican politicians to “stretch beyond the text of the Constitution” that Justice Scalia decried, and that is Senator Ted Cruz. A vote for Ted Cruz is the only guarantee that Justice Scalia’s originalist view of the Constitution will continue to be represented on the Supreme Court.

This entry was posted in Commentary, Cruz campaign, News. Bookmark the permalink.